Software Outsourcing in 2010: Places to Find the People.

Demand makes proposal, so when a country or a group of countries appear in a strong need for something, another region always begins to produce that issue more intensively in order to make deals. Such situation is typical for every period of development of different industries and economic zones. Some regions specialize in producing values, while others build their economy upon the consuming. Thus, the rise of software development industry and the globalization of offshore and nearshore outsourcing caused the appearance of specialized regions all over the globe. In the previous article we analyzed the developed countries including USA, Canada, Northern and Western Europe, Australia and New Zealand, which having a formidable level of hi-tech concentration at home belong to the global zone of demand for the software development labour. Actually software outsourcing teams exist everywhere, but a certain concentration of them in some regions of the world was caused by local social and economic peculiarities. Such states as India, China, Philippines and Malaysia are well-known leaders in low-level software development. Their resident companies perform vast amounts of programming job cooperating with North American and Western European enterprises willing to outsource parts of their software development projects. The reasons for that high level of outsourcing proposal are overpopulation and poor local social standards which result in very low prices compared to average rates within the “demand zone”. Another notable region of IT software outsourcing proposal is the Eastern Europe which consists mostly of ex-members of the Soviet control zone with developing economies. Such countries as Poland, Romania, Czechia, Slovakia, Ukraine, Russia, and Belarus contain significant number of IT software professionals and currently have strong economic ties with Western European countries. Besides, a formidable level of technical science in the late USSR resulted in a good qualification level of today’s IT software developers which due to serious economic decrease in many East European countries in the 1990s became interested in cooperation with Western companies. Finally, East European software outsourcers possess such bonuses as minor language barriers and location within a few time zones from Germany, UK, or France. Similar nearshore outsourcing region working mostly to satisfy needs of North American software development enterprises includes a number of Central and South American developing countries. Mexico and Costa Rica provide serious amount of outsourcing development proposal due to their close neighboring with the USA. Another big outsourcing center is in Brazil, which possesses great human resources and took many efforts in raising its technical level during the last decades. Chile and Argentina also belong to the “proposal zone” of the region, having a bonus of comparatively stable economic conditions. During the last years African countries also began to grow their software development resources. States in the North of the continent make use of their close borders and strong economic relations with European “demand zone”. For example, Egypt and Southern Africa became greatly involved into IT outsourcing during the last years. Several other African countries recently appeared on the market too. Below is a chart reflecting shares of different regions in the world software outsourcing market, based on the rating of the world’s top outsourcing cities and regions where they are located. As we can see, the share of the “demand zone” is about 13 per cent only. 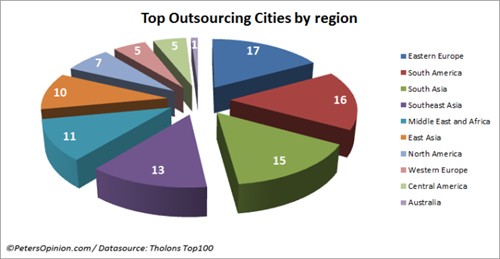 As noted before, the primary reason for outsourcing IT software projects is cost reduction. A software development team from a country within the “proposal zone” can have two or three times lower rates compared to an average programmer’s fee in a “demand” region. In different countries those rates vary depending on many factors: economic situation, closeness to bidder, attractiveness for business, number of competing outsourcers etc. Below is a chart showing average hourly fees for outsourced development projects in companies from Eastern Europe and Southwest Asia.

As we can see from the picture, fees are higher in Eastern Europe. This is mostly due to the quality of local software outsourcers’ work. Besides, this region possesses some bonuses which make it attractive for project managers from the European “demand zone”. They are: geographical proximity, neighboring time zones, very low cultural and linguistic barriers. We can also notice that in Ukraine fees are lower than the average value, so Ukrainian software outsourcers could be a best choice for your project. Michael T., technical analyst